The significative subsystems of a language (lexicon and grammar) associate expressions and meanings with each other. However, these “mappings” are not 1:1 relations, but n:n relations.

The two perspectives in the lexicon

The following diagram illustrates the two directions of the association of expression and content by the example of the German verb unterhalten.

In the onomasiological perspective, one starts from a meaning. In this case, the situation “X diverts/entertains Y” is presupposed, and its linguistic expression is sought. For this goal, German provides, among others, the verbs displayed at the bottom of the diagram.

In semasiological perspective, one starts from an expression. In this case, the construction X unterhält Y is presupposed, and its meanings are sought. These include, among others, the meanings displayed at the top of the diagram. They may be illustrated by the following examples:

The following diagram shows the general logic of the two perspectives:

The two perspectives in grammar

The following diagram illustrates the two directions of association of expression and content on the example of the German possessive genitive:

In onomasiological perspective, we are dealing with the linguistic expression of a possessive relationship between X (the possessum) and Y (possessor). For this purpose, German makes available, among others, the structural means enumerated above and illustrated by the following examples:

In semasiological perspective, we are dealing with the senses/functions of the German genitive. These comprise among others the conceptual relations enumerated above and illustrated by the following examples:

The role of the two perspectives in linguistics

As may be seen, it makes a methodological difference whether one starts from a content or a linguistic function and looks for the structural means that it is expressed by in a language, or whether one starts from a linguistic expression and its structure and investigates its meanings or functions. The former perspective is called onomasiological, the latter semasiological. 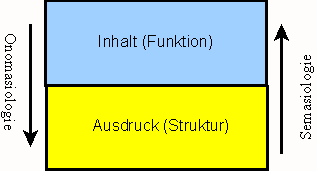 Onomasiology is based on a semantic framework, i.e. a system of concepts, conceptual relations and operations as well as the functions of communication and cognition that is partly extralinguistic, otherwise interlingual. Semasiology is based on a structural framework, i.e. a system of units, relations and processes of the expression medium that is likewise partly extralinguistic, partly interlingual.

As shown by the above examples, onomasiology and semasiology play a role both in the lexicon and in grammar:

Both onomasiology and semasiology provide a one-sided view. Just as everyone uses his language both as a speaker and as a hearer, so the two perspectives have to complement each other in linguistic description.

1 The distinction between these two kinds of lexicons was introduced, albeit in different terms, at the latest by G.F. Leibniz 1696f.